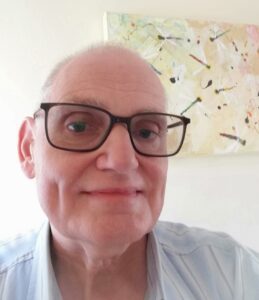 Nicholas was born in Kingston upon Thames and spent twenty odd years
living, learning and working in Surrey. He has previously lived in Berkshire,
Herefordshire, Worcestershire, Shropshire, Wiltshire and more recently in
Devon for nine years.

He recently moved to Lincolnshire fairly close to where the Ornithologist,
Conservationist and artist Sir Peter Scott once lived.

His inspiration comes from our wonderful world particularly the natural world
which includes the animal. vegetable, mineral and environmental. Things of
particular interest have been rock and biological sections as well as things like
pollen fungi and microfossils. He is fascinated by the shapes, colours and
textures seen under a microscope. The venation of insect wings for instance
are used to frame some interesting images in order to create stories.

Whilst living in Devon he was a member of the Tavistock Group of Artists
(TGA) and Drawn to the Valley (DttV) and as such took part in
exhibitions as a member of the Kernow Creative Partnership he showed at the Castle
Gallery in Bude, Harbour House Gallery in Kingsbridge, the Artizan Gallery in
Torquay as well as at galleries in Launceston and Okehampton.

At a young age he spent a lot of tie doodling, drawing and colouring.
Creativity through mark making and walking a line into a doodle is a very
important part of his artistic life. Experimenting and learning as well as
conducting workshops are also important. He turned professional in his fifties.